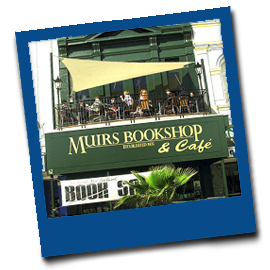 We are fully open during Alert Level 2.  Our hours are 9-5 weekdays and 9-3 Saturdays.

We are sterilising the eftpos keypad regularly. We also have the NZ COVID Tracer QR code for you to scan.

Muirs Bookshop is owned by Kim and Guy Pittar who purchased the shop in September 2008.

Muirs Bookshop first opened its doors in July 1905 as an attachment to The Gisborne Herald, also owned by the Muir family.  Charles Muir, the first owner started as a stationer, newsagent and bookshop with a strong focus on sporting books.  When Charles died in 1943, Bowser Toogood who was married to Charles' niece took over the shop, running it  for the next 40 years.  Apart from a short period between 1983 and 1987, Muirs Bookshop had been owned and operated by someone in the Muir family.

Miss Vivien Quigley was the owner for these four years and she then sold it  to Michael and Anne Muir, the current owners of The Gisborne Herald.  Michael and Anne purchased the neighbouring historic building at 62 Gladstone Road and moved Muirs Bookshop into there.  Then they extended the building, doubling its size, and developing a cafe in the space upstairs before selling the business in 2008.

Our vision, at Muirs Bookshop, is to continue catering for Gisborne people and visitors with a beautiful, well-stocked bookshop that provides intelligent fiction and non-fiction, and the very best in children's literature.   We have also begun a second hand section of out of print local history, New Zealand history and many other non-fiction titles.

We are fully computerised and can search for and locate rare or out-of-print  titles and bring in second hand  to order.

Out Of The Ordinary